The Anelastic Wave Propagation, AWP-ODC, independently simulates the dynamic rupture and wave propagation that occurs during an earthquake. Dynamic rupture produces friction, traction, slip, and slip rate information on the fault. The moment function is constructed from this fault data and used to initialize wave propagation.

A staggered-grid finite difference scheme is used to approximate the 3D velocity-stress elastodynamic equations. The user can has the choice of modeling dynamic rupture with either the Stress Glut (SG) or the Staggered Grid Split Node (SGSN) method. The user has the choice of two external boundary conditions that minimize artificial reflections back into the computational domain: the absorbing boundary conditions (ABC) of Cerjan and the Perfectly Matched Layers (PML) of Berenger.

AWP-ODC has been written in Fortran 77 and Fortran 90. The Message Passing Interface enables parallel computation (MPI-2) and parallel I/O (MPI-IO).

AWP-ODC models an earthquake as a shear crack on an imbedded surface in a linearly elastic medium. As a result, the code simulates an earthquake with the following 3D velocity-stress elastodynamic equations:

are the velocity vector and stress tensor respectively. The material density and LamÃ© coeffcients are denoted

The coupled PDEs are broken up into 9 scalar wave equations and approximated with finite differences.

In a staggered-grid finite difference scheme, each vertex of given cell tracks specific data. Remaining information is provided by neighboring cells. To the right is an illustration of how the 9 pieces of data are distributed among the cell vertices.

while spatial derivatives are approximated by

ABCs explicitly damp waves heading toward the external boundary. PML approaches instead solve an auxilliary set of wave equations near the external boundaries. Although PMLs generally work well, they may suffer from instabilities. In this case, ABCs are a good way to go.

There are many ways to implement PML. AWP-ODC applies an operator splitting approach. Consider easterly wave propagation. The following system of PDEs are derived by decomposing the gradient and divergence operators into normal and tangential components with respect to the propagation direction.

To attenuate reflections, damping is added to the normal components of stress and velocity. With this addition, the first and third equations become the following: 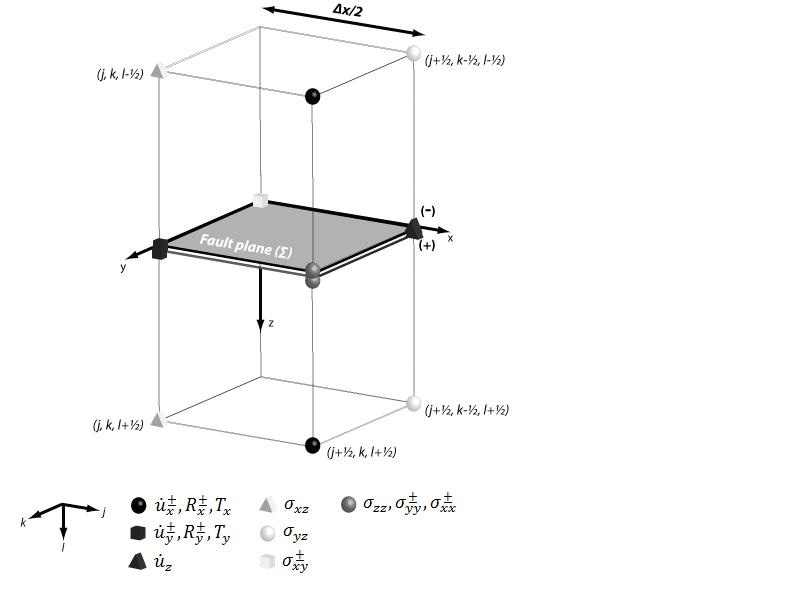 If j0 denotes the fault plane, the SGSN finite difference equations are

IFAULT controls the method of reading the source file(s), the type of simulation to run, and what data to output.


Source file locations in the cases IFAULT=0,1,3,4 are specified near the bottom of the IN3D file. The line

specifies that the text based FAULTPOW file should be read from the /input directory. When IFAULT = 3, this line has no effect since partitioned files are read in from /input_rst/

NVAR specifies the number of variables for each grid point in a mesh file.
There are three different cases.


Memory limitations for large-scale simulationsmake it necessary to partition in the x direction when MEDIARESTART = 2. The following constraints must be placed on the partitioning:

To check that these constraints are satisfied, run /utilities/vcheck from the /run/ directory.

IO_OPT enables or disables data output. The user has complete control of how much simulation data should be stored, how much of the computational domain should be sampled, and how often this stored data is written to file.

NTISKP (NTISKP2) specify how many timesteps to skip when recording simulation data. Default values for both parameters are 1.


For example, if NTISKP = 5, relevant data is recorded every 5 timesteps and stored in temporary buffers.

WRITE_STEP (WRITE_STEP2) determines how often buffered data is written to output files. Default values for both parameters are 1.

IVELOCITY determines whether one single output file is generated, or whether many files are created.